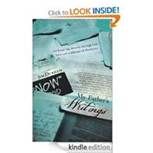 For as long as I’ve known Jim Durham, he’s been a man who’s scribbled his writings and presentations on cocktail napkins.  In every conversation, you see his mind running a million miles a minute and you just know he’s inspired to think about something new, explore a different direction and somehow find a way to put it all together for you.

That’s what he’s done in My Father’s Writings:  An Inspiring Journey through Life, Love and a Lifetime of Memories (Balboa Press, 2012).  He’s collected and compiled years of his Holiday Letters, musings, poems and heart-felt stories into a single book.  While the writings are pure Jim, he uses a third-person literary device wherein a “son” compiles the “father’s” writings after the father’s untimely death in an air plane crash.  As Jim describes in the epilogue, “I think I needed to write about my writings in the third person to be comfortable with the inevitable, deeply personal revelations that flow from these words.”

Knowing an author personally changes the way you read the book.  In My Father’s Writings, I remembered some of the same stories Jim shared with me when we met at industry conferences or client meetings.  Sometimes, the “son” and the “father”  roles confused me — I knew in fact both were Jim’s alter egos.  Mostly though I was impressed with the time it must have taken to organize his various writings and then string them together in a story line.

The more I read, the more I confirmed that Jim and I are kindred spirits — seeking meaning in everyday actions and trying to find places for heart-rendering life events.  He tells the stories of his broken heart and joy in finding new love, in losing a child and adapting to life with a special-needs son.  We read about his professional success and fears of being good enough.  Through it all, Jim writes and these writings fill the book and punctuate his stories. He’s written a Holiday Letter for years (and I’m usually on the distribution list) that tries to make sense of life events and share connections between friends.  He shares the voice he’s found in making motivational speeches.  And he shares his hopes and dreams for how his writings might touch people.

“Have you ever thought about what your message would be to your family if you knew you were going to die,” Jim writes.  “Am I the only one who thinks about these things?”  No, Jim, there are lots of us like you — who wonder if we make a difference, who question our path and who appreciate how connected we all are.

My Father’s Writings is available at amazon.com Yesterday, I went to an discussion-and-book-signing event at Summit Executive Centre (www.summitchicago.com)  for author Norb Vonnegut (www.norbvonnegut.com), who is releasing his second financial thriller, The Gods of Greenwich.  I’d finished my business meetings early and headed over to the event, which gave me some uninterrupted time to talk with Norb, who had been a stock broker in New York with several name-brand companies before starting his second act as a full-time author.  His is an inspiring transition, especially his ability to use the “characters” from his business life as fodder for his novels.

After a pleasant chat with Norb and a sincere agreement to keep in touch on writing matters, I spotted Ginger across the room.  Of all the people who read my blog, Ginger is seemingly one of the most supportive via “liking” and posting comments.  “One of my favorite things about your blog is how you write about the spiritual journey you are on,” she commented to my utter relief (since you never really know what people might say about your inner thoughts and public posts).  Then Ginger told me about numbers — she sees the same numbers all the time.  She grew up in a house number 212 and finds that she sees 212 all the time.  “What do you think it means?” she asked, after sharing that her father had passed away some time before.

I wanted to say that it means whatever you wish it to mean, when out popped, “I think it is your father’s way of saying, keep going, keep the faith.  I don’t think every sign is a watershed, maybe just a little encouragement so you know someone is out there and on your side.”  Ginger agreed and it was nice to see eye to eye and for the time we talked, soul to soul.

It me think about the numbers I see — 519 and 601.  My address growing up was 519.  The number 601 is the first three numbers in my talent agent‘s phone number.  Maybe like Ginger, the numbers I see are my own encouragement — that my parents who’ve passed are giving me subtle encouragement to keep telling my story (519) by using my talents (601).  I’m not sure if that’s the right interpretation but it feels that way.  It’s a lot like finding pennies.

What numbers are in your life?

In the memoir genre, about 70,000 words forms a standard book.  As I cruised past 40,000 words on my project, I thought about the haphazard content I’d typed in double-spaced format.  It was likely time for a professional review and I turned to my cousin Cindy in Los Angeles, who had mentioned she had some writing contacts if I were ever in the market for them.  Cindy dutifully sent along “M”‘s name and put us in touch. As it turns out, M had an intimidating writing pedigree, schooled at a well-known college under the tutelage of a renowned American author, as well as having several published titles to her name.  When I laid out my story, an amazing thing happened.  M told me that she too had been burned at a young age, a casualty of trying to be cool by smoking in a closet.  “Unless I wear a short sleeve top, no one notices,” she said referencing the burns on her arm.  What are the chances that I’d so quickly find a writing professional who would understand the very personal nature of burns?  As luck would have it, M’s plate was full and she did not have time to serve as my critique professional.  Instead, she put me in touch with her similarly pedigreed writing friend “K”. Eagerly I contacted K, who did not have a burn injury to share but rather a witty life story of life as an outsider of sorts in southern Indiana.  More importantly, she had time at hand.  After some hand-wringing, I looked over my project, divided it into 3 parts, packaged up Part I as ready fir review, closed my eyes and hit the “send” button.  And now I wait.  Wondering if my book, or at least the initial piece of it, might pass professional muster,  might have story enough to be told that it has a literary life.  And I wait.

Depending on your spiritual orientation, you might see meaning in everything, nothing or a smattering of things of your choosing.  I tend to see meaning in nearly everything.  That doesn’t mean I agree with everything whole cloth however.  You have to take what works for you and discard the rest.  As I thought about this, Louise Hay‘s Heal Your Life yellow book caught my eye perched on the bookshelf as it was.

Ah yes, I thought, Louise Hay believes that dis-ease is the result of our mental patterns.  “I believe we live in a ‘yes’ Universe.  No matter what we choose to believe or think, the Universe always says ‘yes’ to us.  If we think poverty, the Universe says yes to that.  If we think prosperity, the Universe says yes to that,” she writes, explaining how we are co-creators of our own reality.  I thumbed through the book again, drawn toward her list of life’s problems and their probable mental cause.  “Leg(s),” it read.  “Probably Cause:  Carries us through life.  New Thought Pattern:  Life is for me.”

I never thought life was against me at any time.  But I could certainly affirm more often I guess that “life is for me.”  Simple.

Many years ago, I went to a psychic with a couple of girlfriends.  I didn’t have a burning question at the time but I did ask, “What lessons should I have learned from burning my leg?”  “There are some,” the psychic replied, “such as personal humility and compassion for others.  But have you come to understand that the accident did not happen for your purposes?  The accident was for your mother and the lessons she had to learn in her life.”

I was stunned.  In all the years since the accident, I had never thought there might be a message or learning for anyone else than me.

And that’s what I mean about meaning.  There are so many ways to look at nearly everything (if you are interested in the exploration of course).  What it has meant for me ever since that day is that I look for meaning in different ways and different levels.  More importantly, every time I think I’m just doing things for my independent self, I have to remember how inter-connected we all are.

Cover of The Burn Journals

If you poke around, you’ll see (as I have) that many people write about burns. Recently I finished Burned: A Memoir (www.louisenayer.com), and was fascinated by this book because it describes the effect of a mother’s burn on her daughter. I contacted Louise to ask her some questions about why she wrote the book and we’ve developed a communication of sorts. Other books I need to explore include Burned But Not Broken (www.michaeljnolte.com), Nothing Left to Burn (www.jayvarner.com) and The Burn Journals (www.burnjournals.com).

I’m not sure if the world needs another burn memoir but I still want to publish mine and I realize even from this handful of books that my story is completely different than these. Every burn it seems is unique.