In my main ‘day job’ I work with lawyers, lots and lots of lawyers.  Today as I was yukking it up with Craig-The-Lawyer, he mentioned a key meeting tomorrow and asked me to ‘light a candle’.  Without skipping a beat, I quickly retorted, “Well, I’ll do my best but I have a little problem with fire.”

“What is that,” he asked innocently?

Muttering an internal “dang it” for blathering on so quickly with that comment, I pulled out some of my stock burned-leg phraseology, “Oh, when I was a kid I climbed up a stove and burned the crap out of my leg.”

“Did you?” he said and again I added too much more content.

“I did.  I was trying to get a cookie or a cracker from the cabinet above the stove and well, it didn’t go so well.  My shoe got stuck on the burner and it wasn’t pretty.”

“You’re kidding?” he half-queried.  I realized I might now be stuck in one of those lawyer-socratic-phrase interchanges where I would soon head down the proverbial “slippery slope” of this repartee.  I’d offered too much.  I was conversational toast.

“You know, the same thing happened to me,” he said.

“You’re kidding!” I countered, bemused and intrigued at the same time.”

“Yeah, I must have been four or five and I wanted to get some of the cookies we kept in the cabinet above the stove.  But keep in mind that I was kind of short fellow then so I took the phone book with me, climbed up the stove and put the book over the burner.  Wouldn’t you know it but I accidentally turned the burner on high.  I got the cookie, but the book got torched and I’ll tell you, the whole thing scarred me for life.”

“It was a gas stove, wasn’t it?” I interrupted, now taking over the role of questioner.

“Matter of fact, it wasn’t.  It was an electric stove.  My wife was talking about getting a gas stove the other day and I told her that based on my experience with the electric stove, we could not get a gas one.  That would be certain death for me,” he laughed.

“Wait.  Are you telling me you had the exact same experience I did but you didn’t get burned?”  I couldn’t believe anyone would have a similar story, an almost verbatim same experience.

“What I’m telling you is that I seem to be a whole lot smarter than you,” he teased.  “I brought along that phone book and it worked a whole lot better than your strategy did.”

And so it was true.  My mind raced.  How many families kept cookies in the cabinet above their electric stove?  How many little kids had exactly the same precocious crazy idea as Craig-The-Lawyer and I did?  How many more people did I know who would share some sort of similar death-defying childhood feat?

In my earlier blog post, Cabinets Above Stoves (https://annegallagher8.wordpress.com/2010/11/11/cabinets-above-stoves/), I wrote about my strange sensitivity for placing goodies above the cooker.  It doesn’t seem so strange anymore.  In fact, I can attest to countless conversations with my relatives and childhood friends who, as adults, will tell me, “You know, I have to tell you.  I’ve told my kids about your accident and it’s how we talk about being careful in the kitchen.”  At first, it used to take me aback to hear these things, as if burning-my-leg-by-climbing-up-a-stove was my lasting legacy.  Over time however I found it almost reassuring — that if I was to be the poster child for stove-related accident prevention, I could live with being a something of an off-beat hero.

By the way, the wry title of this post “What are the Chances?” is obviously a rhetorical question.  Years ago, I might have thought that running into people like Craig-the-Lawyer who have similar stories to share was an anomaly.  Now, I know that it is just the path I’m on these days.  Lots of serendipity.  No coincidences. 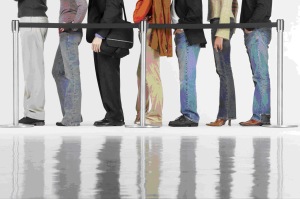 May is a uniquely busy month for parents with school-age children.  As the school year ends, there are celebrations galore – from the athletic banquet to the spring concert, the father-daughter dance, the girl scout bridging ceremony and the end of the basketball travel team league.  At a certain point, any sane adult simply starts going through the motions.  My mental state was precisely there as I joined the line cascading around the corner for entry to the Spring Show, the annual song-fest where each of eight grades and kindergarten sings a couple of numbers.

Directly behind me in line stood R and her daughter M, the teenage girl burned in a home accident just weeks before.  Thick white burn tape provided a necklace around her neck and her arm was tightly bandaged in the same special tape.  Before I knew it, I had re-introduced myself to R and told them I too was burned as a child.  As I said it, I like itching myself.  It seemed to come from my stomach, which turned itself slightly at the thought.  As we talked, M shared, “I itch all the time.  It’s constant.”  I remembered the feeling well.  Insatiable itching that seemed to crawl inside with no good way to relieve it.  M also said that her burns were second degree, which immediately relieved me and I told her how well she would heal.  It’s the 3rd degree burns that leave the nasty scars — 2nd degree can heal with nary a reminder.

When they asked what happened to me, I told them about my burn accident, then gently rolled up my pant leg to show them a little of the scars.  “Yours seems so much worse than mine,” M said and I immediately felt bad that she focused on my injury when hers was so recent and raw, itching as it healed.  Her mother R looked and me, her eyes brimming with wet and said, “See M, look at Anne.  She’s successful and pretty.  We can make it through this.  It didn’t stop her.”

Like me, M didn’t like it when people stared at her.  We talked about “to tell” or not to tell strategies, to make eye contact or not to.  M seemed remarkably mature for a teenager.  She had a presence.

“M, it may not feel like it right now, but your burns are a gift.  Look how they help you teach other people.”  I believed it as I said it.  It would not have been the gift I’d chosen for myself, but I always felt right with it.

The line began to disperse as we entered the school gym for the Spring Show.  R hugged me tightly whispering, “thank you” as they wandered off to their places.

As the 4th graders began “Getting to Know You,” from the Lion King, I wondered:  How much more difficult are these burns for a parent? R was there when M’s leaned over the gas stove and her scarf caught fire.  She choked up as she told me about it.  They are replacing the stove with a smooth-topped electric model.  I understand.